We’re working together with locals to improve water quality in the Waitao catchment and make Kaiate Falls swimmable.

The Kaiate Falls are on the Kaiate Stream, which flows into the Waitao River and ends in the southeast corner of Tauranga Moana. The Falls are a popular spot for visitors and locals to enjoy but are not currently safe for swimming due to unsafe levels of E.coli faecal bacteria in the Kaiate Stream.

A Toi te Ora Public Health permanent health warning has been in place for the Kaiate Stream since 2015. Swimming in water that has high levels of E.coli increases people’s risk of becoming sick with symptoms that can include diarrhoea, vomiting, and skin, eye or ear infections.

Together with landowners, hapū, technical experts, Ngā Whenua Rāhui, Western Bay of Plenty District Council and the Waitao Landcare Group, we’re working to identify and address the main sources of bacteria and other contaminants in the Kaiate Falls and wider Waitao catchment.

Approximately 60 percent of the main river-banks in the Kaiate Stream catchment have now been fenced and in many cases planted, to improve water quality and wildlife habitat in the area. 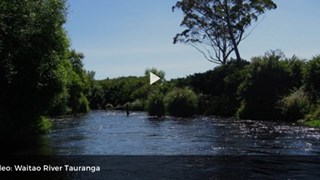 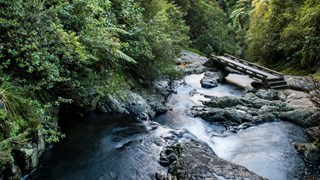 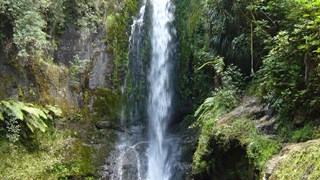 Since 2015, we’ve increased our water quality monitoring and research efforts so that we can better understand the main causes of the poor water quality and explore new solutions. So far we’ve found that:

You can see the latest swimming water quality results for Kaiate Falls and other locations throughout the region at www.lawa.org.nz and results from recent catchment water quality sampling in the dashboard below. See below for additional resources and recent scientific reports.

Follow this page (see button top right) to receive email updates when news items and events are added to this page.
In the meantime, please contact us if you have question or would like to find out how you can get involved:
Hayden Schick, Bay of Plenty Regional Council Land Management Officer
Hayden.Schick@boprc.govt.nz
Ph: 0800 884 880

Improving fresh water quality one native plant at a time

The first of more than 60,000 native plants have gone in the ground on properties which sit above the Kaiate Falls, to help improve water quality and increase biodiversity in the Waitao catchment.

The plantings are the first of many, resulting from the nearly $1.5 million successfully secured by Bay of Plenty Regional Council through the Government’s One Billion Trees funding in August.