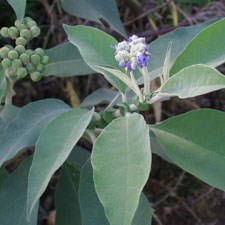 Introduced to New Zealand from South America as a garden plant in 1880. Also known as tobacco weed or kerosene plant because of its strong kerosene-like smell. Woolly nightshade is allelopathic, which means it creates toxins that poison the soil preventing other plants from growing.

Woolly nightshade can grow in a large range of habitats. Common areas are gullies, roadsides, neglected farms, and wasteland, along with pastoral land, disturbed forest margins, and urban areas – anywhere that birds poop!

Woolly nightshade is established and widespread throughout several areas within and surrounding Tauranga. Smaller infestations exist in eastern Bay of Plenty and the aim is to reduce these. It is very sparse in the Rotorua area and council is keen to stop it from becoming established here.

Woolly nightshade is both a Progressive Containment and Sustained Control species. Please see the map to determine which rules apply to your area.

Sustained Control pests are well established in the region and preventing the spread is no longer a realistic objective. Management focuses on reducing general impacts of the pest. Landowners/ occupiers are responsible for the control of these pest species on their land. Council may enforce control.

Occupiers must destroy woolly nightshade if it is either within 200m of any property boundary where the adjoining occupier is also controlling it OR if required by a written direction from an authorised person.

Wear gloves and a mask if undertaking woolly nightshade control for extended periods.

Follow up treatment will be required as cut stems can readily re-sprout and seedlings will continue to emerge until the seedbank is exhausted. 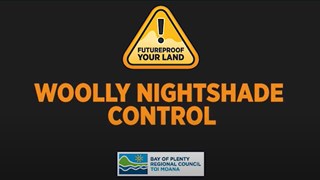