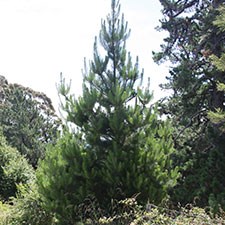 For the purposes of this definition, a forest plantation is an area of 1 hectare or more of predominantly planted trees.

The various wilding conifer species present in New Zealand are classified as either Sustained Control or Progressive Containment pests, as outlined in the Wilding Confer Table below:

Occupiers must destroy wilding conifers if they are either within 200m of any property boundary where the adjoining occupier is also controlling them OR if required by a written direction from an authorised person.