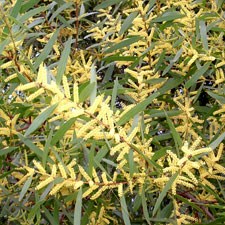 Sydney golden wattle is native to Australia, and even in its native habitat, it is considered a pest of some coastal areas. It was widely planted in New Zealand as a garden ornamental and restoration plantings. Can reach 7-10m in just five to six years.

Found in coastal areas throughout the Bay of Plenty. It grows well on coastal dunes, riparian areas, dry banks, transport corridors, scrub and open forest. It is tolerant to salt spray thanks to its leathery leaves.

If hand pulling, try not to disturb the soil too much. This may encourage new growth of seeds already in the ground.

Plants can remain in situ to rot down. If there are just a few plants, you can dispose of all plant material at a refuse station in general waste.