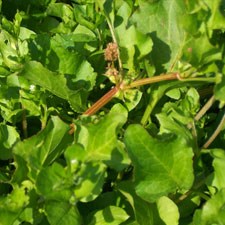 Spiny emex is native to southern Africa. This plant is a major pest in parts of Australia where it is commonly called ‘doublegee’. The new leaves of the plant are edible and recorded as tasting similar to spinach. It is thought to have been brought to New Zealand in fodder imported from Australia in 1883.

Only found in Maketū within the Bay of Plenty region. It likes the sandy soil of coastal areas but can adapt to a variety of soil types. Can be found in backyards, pasture and areas where soil has been disturbed.

Note: Council will maintain control and management of wallaby, African feather grass, Asiatic knotweed, alligator weed, feral goats and yellow flag iris. These pests are high risk but will not meet the eradication objective, and do not lend themselves to occupier control responsibilities.

Control of spiny emex should be done when the plant isn’t in seed. This will help to reduce the seed bank over time.

Continue controlling the plants until the seed bank is exhausted. Sow thick/dense pasture or plantings in place of where plants once where to discourage new growth. All plant and root material should be disposed of at a refuse station in general waste.