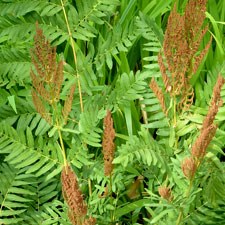 Royal fern originates from Europe, west Asia, India, Africa and America. It’s deciduous (does back in winter) and is hard to miss with large fronds growing up to 3m long and 75cm wide. Naturalised in New Zealand by 1890, its fibres were used as a potting medium to cultivate orchids.

Royal fern can be sprayed but care is needed when using agrichemicals over water.

If manually removing plants, always take care contain the spores and remove all fragments of the plant – including the roots which can grow quite deep. Dispose of plant material in general waste. If foliar spraying, leave the plants to rot down.

Always follow up every 3-6 months or when you notice new growth.