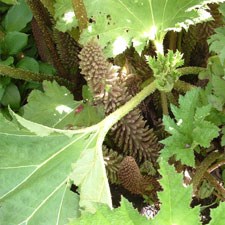 Originates from Chile and Argentina. Introduced to New Zealand as an ornamental garden plant and naturalised in 1968. It looks similar to rhubarb but is unrelated. Gunnera species are known for their symbiotic relationships with cyanobacteria. The blue-green algae Nostoc is found in the root nodes where it fixes nitrogen into the soil.

The Bay of Plenty Regional Council does not enforce the control of advisory species. It is landowner/occupier responsibility to manage these pests. Council may provide advice on how to manage or control these species if required.

Dispose of any plant and root material at the refuse station in general waste. Continue treating new growth and pulling seedlings as they appear.