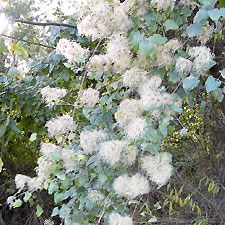 Named after its seed clusters that look similar to an old man’s white woolly beard. Originates from Europe and was introduced to New Zealand in the early 1900’s.

Old man’s beard is sustained control in the Rotorua district and progressive containment throughout the rest of the Bay of Plenty. This means that landowners/ occupiers are responsible for its control throughout the Bay of Plenty.  However, in the Rotorua district occupiers/landowners must control Old man’s beard within 10m of any property boundary where the adjoining occupier is also controlling it or if directed by an authorised person. Please refer to the map on this pager to determine which rules apply to your area.

Sustained control pests are well established in the region and preventing the spread is no longer a realistic objective. Management focuses on reducing general impacts of the pest. Landowners/ occupiers are responsible for the control of these pest species on their land. Council may enforce control.