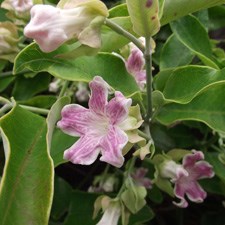 Originally from South America. It was introduced to New Zealand as an ornamental species and recorded as naturalised in 1888.

Poisonous and can cause dermatitis, protect skin against contact with sap. Destroy ripe pods first to minimise seed. Pods should be incinerated, buried deeply or disposed of at refuse station.