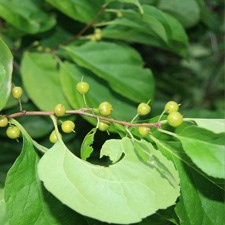 Native of Japan, China and Korea. Brought to New Zealand as an ornamental plant, the flexible stems can be used for wreaths.

Present throughout the Bay of Plenty, with majority of sites found in Rotorua. Climbing spindle berry can be found in roadside vegetation, forestry, and native bush.

Climbing spindle berry is listed as Progressive Containment in some parts of the region and Sustained Control in other parts. Please see the map below to identify which rules apply to your area.

Sustained Control pests are well established in the region or parts of the region and preventing the spread is no longer a realistic objective. Management focuses on reducing general impacts of the pest. Landowners/ occupiers are responsible for the control of these pest species on their land. Council may enforce control.

Climbing spindle berry is best controlled spring through to summer when it is actively growing.

Repeat treatments will be required for several years.