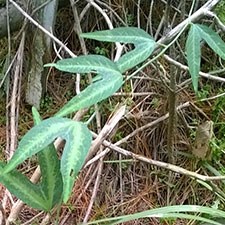 Where is it originally from?

Bat-wing passionflower is native to Costa Rica, Panama, Honduras and Mexico. A relatively new introduction to New Zealand in the 1990s, it gets its name from its bat-wing shaped leaves and flowers that are very similar to the passionfruit flower.

There are no known sites of bat-wing passionflower in the Bay of Plenty and we want to keep it that way.

Bat-wing passionflower can grow in a range of locations as it is shade tolerant. High risk locations can include regenerating native forest and scrub, home gardens, hedges and fence lines. Basically, wherever birds rest and poo the seeds out.

Exclusion pests are not known to be present in the Bay of Plenty region. The Bay of Plenty Regional Council is responsible for managing any new incursions into the region. Landowners or occupiers may be required to support a control operation to be undertaken.

Please contact the Bay of Plenty Regional Council if you think you have found bat-wing passionflower.