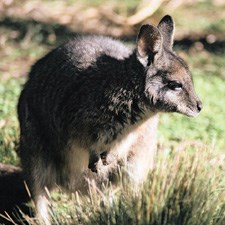 It is important that any wallaby sightings outside of the normal distribution (west of Rotorua, east of Kawerau or south of Rainbow Mountain), are reported immediately online at reportwallabies.nz or by phoning 0800 STOP PESTS (0800 786 773).

Progressive Containment species are pests which the Council aims to prevent from spreading, reduce the distribution, or eradicate within parts of the region over time. W

Within the Progressive Containment area landowners should contact Council for advice on wallaby control options.

Note: Council will maintain control and management of wallaby. They are a high-risk pest but in some areas will not meet the eradication objective, and do not lend themselves to occupier control responsibilities.

Find out more about what is being done to control wallabies in the North Island through the 'Jobs for Nature' funded programme. Administered by Biosecurity NZ (MPI), the four year funding is being delivered through partnerships with regional councils, Department of Conservation, Iwi, landowners and the community.

On private farmland night-shooting is an effective control option. Generally, a scoped .22 LR is adequate although a .22 Magnum is more effective. Centrefire rifles in .222 and .223 calibres are also effective. Night-vision and/or thermal imaging scopes can increase the efficiency and effectiveness of night shooting operations.

Effective night-shooting is a skill and should only be attempted by licensed, experienced shooters.

Limited poisoning options are available for wallaby. Only two pesticides (1080 and Feratox encapsulated cyanide) are registered for use on wallaby. Both of these pesticides require the handler to hold a Controlled Substances Licence and their use is regulated by WorkSafe and the Medical Officer of Health. Although highly vulnerable to aerial or hand broadcast bait, wallaby are reluctant to feed from some types of bait station. Where wallaby co-exist with possums, they are likely to be excluded from accessing bait stations by the smaller, yet more aggressive possums.

CAUTION: When using pesticides please READ THE LABEL thoroughly to ensure that all instructions and safety requirements are followed.