Seen a wallaby? Report it here

Dama wallabies were first released near Lake Ōkāreka in 1912. Since then they have been steadily expanding their distribution. It is estimated that if no control work is undertaken, a third of the North Island could be impacted by the spread of wallabies within 50 years.

Why wallabies are an issue

In 2020 as part of the ‘Jobs for Nature’ funding, $27m was allocated over a four year period to control wallabies in New Zealand. This control is for Bennett’s wallabies in the South Island and dama wallabies in the North Island. Administered by Biosecurity NZ (MPI), the four year funding will be delivered through partnerships with regional councils, Department of Conservation, Iwi, landowners and the community.

Once this has been achieved we will begin strategically targeting wallaby populations to reduce the size of the containment area and investigate the possibilities of eradicating wallabies from the central North Island.

The below map shows the current containment area and the buffer zone, which has been identified as the area where priority will be given. 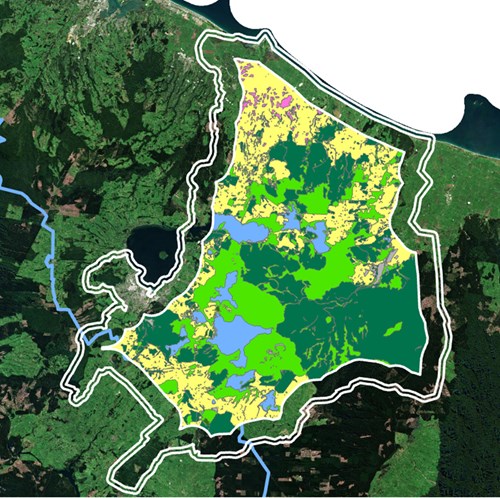 Current activity in year one of the programme is focused on surveillance and control of ‘satellite’ populations in areas where wallabies are believed to be dispersing from. Contractors, with specially trained wallaby indicator dogs and trail cameras, are being used to locate and determine the extent of dama wallaby populations.

Where wallaby populations exist outside of the containment area, councils will work with the landowners to plan and deliver wallaby control (currently at no cost to landowners). Landowners/managers located within the containment areas are advised to contact their council Biosecurity staff for advice on wallaby control options to suit their situation.

Wallaby-proof fencing is being installed at various points around the containment area to reduce the potential ‘leakage’ of wallabies in areas where no natural barriers, such as rivers, exist. 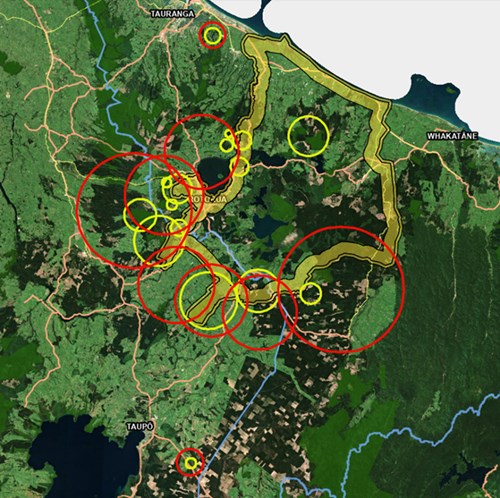 Satellite populations currently under surveillance, in red, and control, in yellow.

Why do we need to remove wallabies they do not look like a pest?

Wallabies are relatively cute looking but looks can be deceptive.

With a huge appetite for many seedlings and shrubs they can change the structure of native bush. This then impacts on native birds and animals seeking food and shelter.

Wallabies also eat grass, which means they compete with livestock for food and impact on farm production.

Can a wallaby be kept as a pet?

No. There have been cases where wallabies have been moved between different regions and as a result new satellite populations have become established. Though appealing as a joey when they mature, they need space to move around, get boisterous and are very hard to contain.

Wallabies are classified as an unwanted organism in the Biosecurity Act and moving of any live wallaby is an offence unless a specific permission has been granted by MPI. Holding or keeping a live wallaby is also a breach of regional pest management plan rules, which may result in prosecution.

How are wallabies controlled?

Unfortunately there are currently very limited options for controlling wallabies. It’s important to first establish that there are wallabies present in an area and establish potential numbers. This is done through surveillance with trail cameras and specially trained detector dogs.

The method of control differs based on a number of factors such as location, population density, land terrain and requirements of landowners.

Currently we use shooting and toxins to remove populations however new and better ways of shooting and poisoning are currently being researched.

Why should wallaby sightings be reported?

Wallabies can move and disperse quickly. Reporting any sighting of a wallaby allows surveillance to be undertaken as soon as possible. This is particularly important when wallabies are identified outside of the containment zone and in areas, they should not be in.  We do not want them to invade further.

Timely reporting will give us the best chance of finding the wallaby before it moves further.

Are there any new control options on the horizon?

We are investigating the use of heat-sensing drones to potentially direct hunters to single animals. The use of drones potentially could be used for bait delivery to isolated and difficult to reach areas.

We are also investigating whether some of the new toxins for possum and rat control will be effective on wallabies. Repellents which aim to stop non-target animals, such as deer, from eating toxic baits will also be trial to assess to ensure wallabies are not deterred.

Wallaby-proof fencing is currently being installed in specific areas to control the potential movement of wallabies from moving to new territory.

How can the community help?

The single most important action that anyone in the community can do to help is to report any sightings to www.reportwallabies.nz

Kiwis out in the bush asked to report wallaby sightings

TVNZ 1 News aired a story on 22 December highlighting the wallaby issue in the North Island and how the public can help by reporting any sightings. Featuring Bay of Plenty Biosecurity Officer Dale Williams and Wallaby dog handler Kimberley Tiddy, the story profiled the scale of just how quickly wallabies are spreading and the impact that they have on the native bush.

The Dama Wallaby Team are trialing innovative ways to help stop the spread of wallaby. One of these tools is the use of wallaby-proof fencing to reduce the risk of wallaby crossing the Kaituna/Okere River. The fence runs for about a kilometre either side of SH33 north of Ōkere Falls.

The Dama Wallaby Team are trialing innovative ways to help stop the spread of wallaby. One of these tools is the use of wallaby-proof fencing to reduce the risk of wallaby crossing the Kaituna/Okere River. The fence runs for about a kilometre either side of SH33 north of Ōkere Falls.

The fencing being used is the same height as a standard farm fence but is made of Waratah netting and an additional 30cm section is pegged flat on the ground to stop wallaby pushing under the fence. The Waratah fencing system is all steel and it can be erected very quickly.

The Wallaby Team will be comparing the material costs and ease of construction of the Waratah system against a similar fence design utilising locally sourced netting and wooden posts.

Wallaby dog surveillance recently showed wallaby to be present below the Waikite Valley Golf Course. These wallaby lived by day within the scrub and by night would feed on the pasture grass.

Wallaby dog surveillance recently showed wallaby to be present below the Waikite Valley Golf Course. These wallaby lived by day within the scrub and by night would feed on the pasture grass.

Contractors to the wallaby programme conducted night shooting operations over a 5 night period using a drone and firearms equipped with thermal imaging. On the first night 33 wallaby were shot and by the end of night 5 the total had increased to 62!

The below image is a screen shot from the LINZ Wallaby Information System (Wall-IS) a GIS portal where contractors record their movements as tracks and detections and kills as points. A mobile phone application was developed by LINZ and enables contractors to use quick capture software to record and send information to Wall-IS at the touch of a button.

Night shooting  is an effective form of controlling wallaby particularly when numbers are relatively low. Hunting extraordinaire and Māori master chef Pete Peeti  has been featured on TVNZ's Te Karere highlighting his skills and experience to support Māori landowners in Rotorua by culling pests on Māori land.

Watch the recent story by Local Focus on how wallabies are being tracked in the bush using three different methods.

The annual Mamaku Marsupial Madness Challenge held on the 15th / 16th May was apparently the most successful one yet since the competition began in 2008! Every year Mamaku School, with a role of just 108 children, holds a competition to help eradicate the various invasive pests in the surrounding forests and on the local farms.

The annual Mamaku Marsupial Madness Challenge held on the 15th / 16th May was apparently the most successful one yet since the competition began in 2008! Every year Mamaku School, with a role of just 108 children, holds a competition to help eradicate the various invasive pests in the surrounding forests and on the local farms.

The 24 teams entered in the 2021 competition helped to eradicate 664 possums, 120 wallabies and 172 rabbits / hares. Last year 71 wallaby were eradicated - making this year an increase of 69% and reinforcing the need for the progressive containment strategy that the North Island Wallaby Programme is focused on in the short term to stop their further spread.

The highest number of wallaby eradicated in this year's competition were from Upper Lichenstein Road (NE of Ōkere Falls), the Mount Tarawera foot slops and around Lake Rotoiti. This provides key information to the Wallaby Programme team on potential population densities.

Many congratulations to the organisers and all of the teams who participated and for doing their bit to protect what we’ve got. Ko Tātou This Is Us. 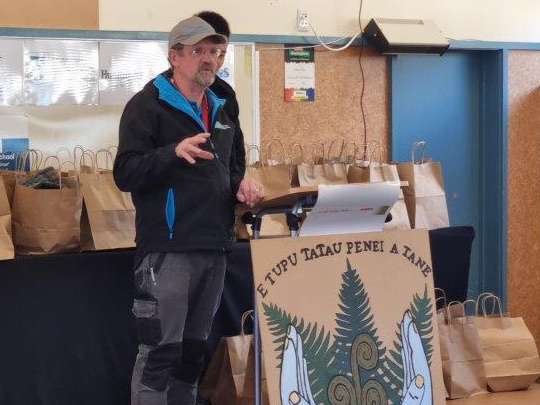