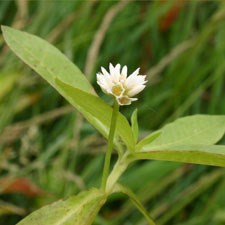 Alligator weed originates from Brazil, and was first discovered in New Zealand in Dargaville in 1906 where it is thought to have arrived as a hitchhiker in ship ballast water. It has since spread across the top of the North Island, including to the Bay of Plenty, by accidental movement of plant fragments through earthworks, fishing nets, and kumara farming.

There are several known sites in the Bay of Plenty where alligator weed is being actively managed. These include the Rangitāiki River and terrestrial sites in Tauranga, Ōpōtiki and the East Cape area.

Note: Council will maintain control and management of alligator weed. It is a very high risk plant and would not be feasible for occupiers to control.

Control of alligator weed is funded and carried out by Bay of Plenty Regional Council. We would like members of the public to let us know of any possible sightings of this plant.

Please do not attempt to control this plant, it is exceedingly difficult!

If you think you have found this plant, please let us know. Staff will always follow up possible finds of this plant and, if confirmed, we will work with you to control it.

Please avoid any transfer or dispersal of plant material. This is a highly invasive plant and requires special care when disposing of.