Māori are key partners, stakeholders and members of our community.

The Bay of Plenty has the largest number of iwi within any region in New Zealand and also has New Zealand's second largest Māori population.

Māori make a significant contribution to our region through their ownership of notable assets; contribution to economic development; participation in co-governance and their growing influence in the conservation, preservation and management of our natural resources.

Our region's population is 28 percent Māori. Of the regions land area, 38 percent is in Māori ownership, with 1800 Māori Land Trusts managing these assets. There are 35 iwi, 260 hapū and 224 marae located across the region and many have iwi or hapū management plans.

We work on a wide range of planning and policy issues that may require some form of Māori and iwi engagement. We are committed to growing our partnerships with Māori through collaborative engagement.

The Waitangi Tribunal has held 17 historical inquiries across the region identifying Treaty breaches. Iwi have used these reports to support negotiations of several comprehensive Treaty settlements with the Office of Treaty Settlements.

In August 2021 Toi Moana Bay of Plenty Regional Council made a decision to fly the National Māori flag (NZMF) daily.

In August 2021 Toi Moana Bay of Plenty Regional Council made a decision to fly the National Māori flag (NZMF) daily. Previously the NZMF had been flown on select occasions of significance, since 2011. Daily flying of the NZMF alongside the New Zealand flag and our Regional Council banner, provides regional acknowledgement of our relationship with tangata whenua/hapū/Iwi and recognition of Treaty partnerships in the Bay of Plenty. The NZMF is symbolic of Councils strategic priority of enhancing partnerships with Māori for the collective benefit of our region.

Designed in 1990, the NZMF flag denotes the intimate relationship between earth (Papatuanuku), sky (Ranginui) and the world of light in between (Te Ao Marama). It is reflective of the Māori creation story where all elements are intertwined and where balance and reciprocity is maintained as a key to sustaining life.  Red is the colour of the earth, black the heavens and white the world of light. The koru is a symbol of eternal growth.

On 14 December 2009, Prime Minister John Key confirmed that the NZMF would fly alongside the New Zealand flag, rather than replacing it, to recognize the Crown–Māori relationship.

Further information on the flag can be found on the Ministry for Culture and Heritage website.

Just as the New Zealand flag means different things for different people, we acknowledge the NZMF may also hold different meanings for individuals. We do not endorse one perspective over another, but instead view the NZMF as a way to recognise the status of Māori as tangata whenua.

The Treaty principles and the partnership upon which it is founded are an established part of our local government framework. Collectively, Māori contribute significantly to the region through cultural leadership, ownership of notable assets, economic investment initiatives, participation in co-governance arrangements with councils, and a growing influence in natural resource management.

We are focused on continuing to work collaboratively with Māori, as key contributors to strategic direction and leadership in the region.

Councils approach to flying flags accords strictly with the requirements of the Flags, Emblems, and Names Protection Act 1981 and with central govern guidance on flying other flags (like our Regional Council banner) alongside the NZ national flag.

The NZMF currently flies atop the Tauranga and Whakatāne Council buildings.  Rotorua Office does not currently have a flag pole, staff are exploring options. 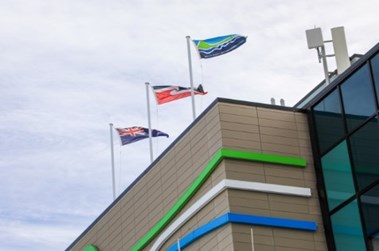 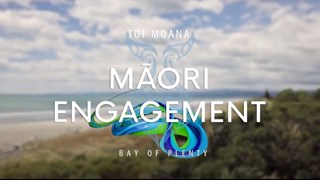