New and rare fish species have been discovered by Toi Moana Bay of Plenty Regional Council scientists in the Nukuhou catchment.

Environmental data samples were taken from three sites in the Nukuhou catchment, and the results show an array of bird, mammal, fish, and plants.

“An exciting result was the detection of Cran’s bully, this is the first confirmed record of Cran’s bully in this catchment,” said Graduate Environmental Scientist Erin Fox.

“Being very similar in appearance, confusion can occur when identifying Cran’s bully from common bully. While there have been other possible Cran’s bully records in the Bay of Plenty, this is the first detection with support of DNA coding”, Mrs Fox said

“The testing also confirmed the threatened fish species, Shortjaw Kokopu, remain present in the Arawhatawhata Stream; however, they were only detected in one out of 12 samples which suggests that they may be low in abundance.”

This research is part of the Ōhiwa Fish Passage Project, working to develop a greater understanding of indigenous fish species and restore connectivity in the Ōhiwa catchment.

Many native fish species undertake significant migrations as part of their life cycle (e.g., shortfin eels, longfin eels, inanga, and smelt). Access between saltwater and freshwater for different stages of their life cycle is essential. Instream infrastructure, such as culverts, weirs, and dams, can delay or prevent fish movements. Overtime, this has resulted in a reduction in the distribution and abundance of some of our most iconic and valued freshwater species.

Weka, yellowhammer, human, cattle, and rat were among some of the other species detected. This environmental DNA is genetic material that is shed by organisms through the loss of skin, hair, scales, fluids, and bodily waste.

“One day we would love to see eDNA results that reflect an increased diversity and abundance of native species and a reduction in mammalian sources. This would not only show increased freshwater ecosystem health but the terrestrial biodiversity values of the catchment as well.”

“eDNA sampling is extremely sensitive, and a level of educated interpretation is required when reading the results. For example, snapper DNA was found at each location, given it is highly unlikely that snapper have taken residence in freshwater, the results are more likely to have come from discarded fish frames.” said Mrs Fox

"Carrying out further surveys in the Ōhiwa Catchment, to build on previous work, will increase our knowledge of existing fish communities and instream structures, allowing for the development of a strategic plan to increase instream connectivity in the catchment,” said Mrs Fox.

Further eDNA sampling across the Ōhiwa is planned for later this year and will look at 10-20 more sites. 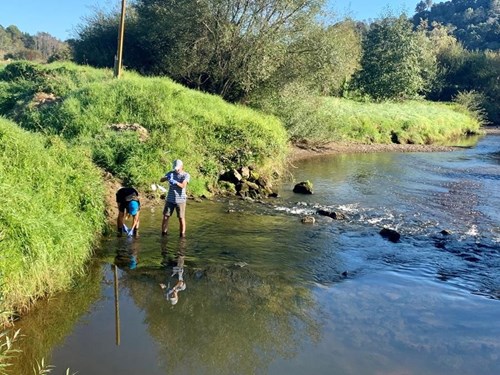 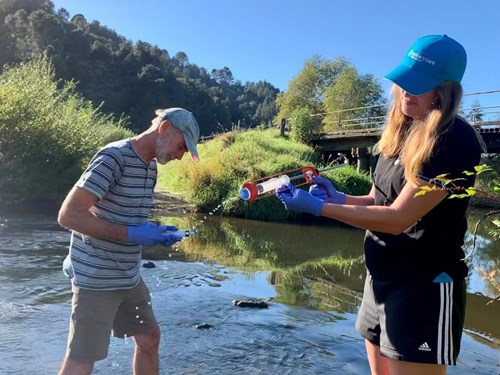