Monitoring sites also recorded evidence of tsunami waves in the Bay of Plenty – something Data Services Manager Glenn Ellery said shows why it was so important to heed Civil Defence Emergency Management advice around coastal waters when issued.

The eruption had occurred roughly between 5.20pm and 5.28pm on Saturday New Zealand time. Regional Council’s monitoring site at Ōmokoroa Wharf in Tauranga Harbour showed a distinct spike in atmospheric pressure from 7.15pm to 8pm as the shockwave from the eruption passed through the area.

This was followed by evidence of tsunami waves in the harbour from 9.20pm with a peak from 1am to 2am on Sunday morning.

Mr Ellery said effects of the tsunami waves were not just seen in the region’s harbours, but also in its rivers.

The monitoring site at Ford’s Cut on the Kaituna River recorded evidence of tsunami wave action from around 8.45pm on Saturday.

There was a large 650mm change of water level in the river between 4.38am and 4.59am on Sunday morning.

Mr Ellery said this rapid change in levels represented a significant amount of water, and velocity, surging up the Kaituna River and an equally strong current flowing out again from the tsunami waves.

“This data shows why it is so important to heed advice from Civil Defence during events such as this,” said Mr Ellery.

“Strong and unusual currents and unpredictable surges around our coastlines and river mouths can occur in response to natural events and may not always be easily seen to the eye.

“While we had peak tsunami waves occur early in the morning in this case, when it is unlikely people will be near or in the water, had it occurred at another time we could have swimmers and fishermen easily get into trouble.”

Similar results with rapid changes in water levels were seen in monitoring sites from the Western Bay across to the Eastern Bay of Plenty.

The Regional Council manages over 75 live water level monitoring sites across the Bay of Plenty Region. 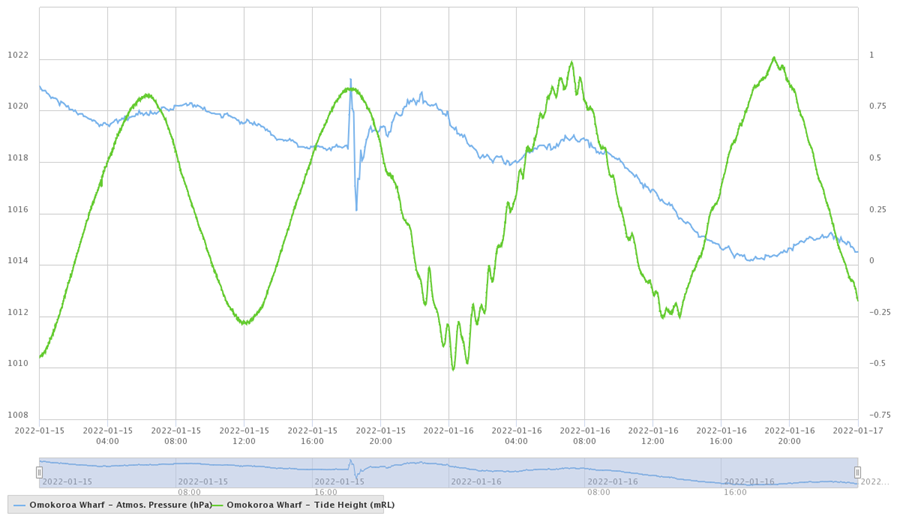 A chart showing atmospheric pressure and water levels at Ōmokoroa Wharf in Tauranga Harbour during the time the shockwave and tsunami waves from the Tongan eruption hit. The crest and trough of the shockwave is clearly visible. 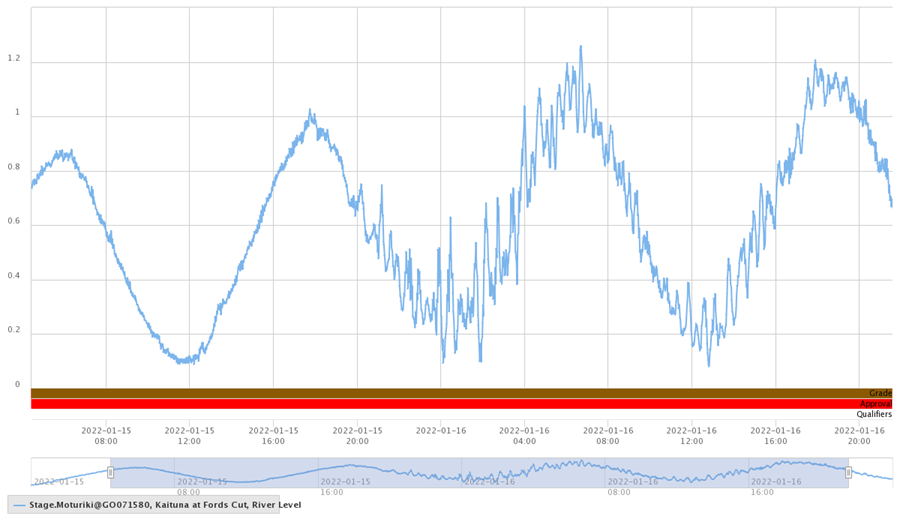 A chart showing tsunami wave action from the eruption of the Hunga-Tonga-Hunga-Ha'apai volcano near Tonga at Ford's Cut on the Kaituna River.