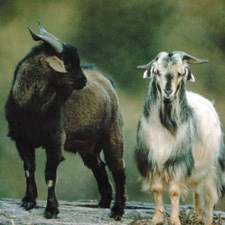 Feral goats were first introduced into New Zealand as a food source in the nineteenth century, by whalers and sealers. They were subsequently used to control weeds on land and to establish a commercial fibre (mohair) industry. Control began as early as 1915, with Government funded goat control beginning in 1924 to protect conservation values.

Under the Wild Animal Control Act 1977, a feral goat is any goat that is not:

(a) held behind effective fences or otherwise constrained; and
(b) identified in accordance with a recognised identification system (as described under the Animal Identification Act 1993).

Any feral goat that invades a property may be destroyed or otherwise disposed of by the landowner. Non-feral (tagged) goats that trespass may be dealt with under the Impounding Act 1955. For further information contact your local district council. All care should be taken to avoid such circumstances through responsible animal husbandry.

Feral goats are listed in the Bay of Plenty Regional Pest Management Plan as either “Eradication” or “Progressive containment” species, depending on their location. Please refer to the map below to identify which rules apply to your area.

Note: Council will maintain control and management of feral goats. These pests are high risk but will not meet the eradication objective, and do not lend themselves to occupier control responsibilities.

Shooting is the most effective goat control method. It is strongly recommended that only experienced hunters carry out goat control work as poor delivery could result in surviving animals dispersing and becoming very wary of hunters.

Sunny faces in areas of steep terrain and scrub (favoured goat habitat) can be effectively covered by helicopter, and aerial shooting is often a cost-effective control option alongside conventional ground control methods. Contact the Bay of Plenty Regional Council for advice on control operations.

Fencing is another option to exclude goats. The best goat proof fence is a deer netting fence that is well secured at ground level.