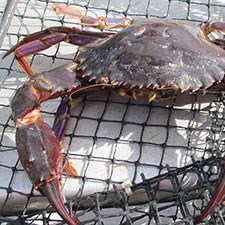 Usually found on the coast of Japan, Korea, and Malaysia, Asian paddle crabs were first detected in New Zealand in 2000. The Asian paddle crab is an aggressive defender of its territory making it a fierce competitor for native crabs and potentially giving humans a nasty nip.

The rules around keeping boat hulls clean and preventing the movement of marine pests:

It is important to ensure vessels are clean from invasive pests before entering the Bay of Plenty.