Geothermal can be hazardous.

Boiling pools can cause thermal burns and even death. Concentrations of toxic chemicals (like mercury and arsenic) and toxic or asphyxiant gases (hydrogen sulphide, carbon dioxide) are also hazardous. Some systems may also have the potential for hydrothermal eruptions. Using geothermal wells can also have associated risks.

Collapsing ground can be a significant problem. The formation of collapse holes is usually restricted to areas of higher heat flow where steam is present with shallow ground water levels.

Subsidence can be induced by large-scale production of geothermal systems. The rock formations at depth are dewatered and the pores collapse. This was a significant issue in the early production days. Lessons learnt from this and reinjection regimes have decreased the occurrence of wide spread subsidence today. 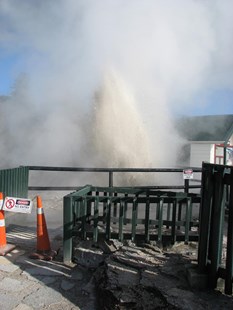 Minor events originate at depths of a metre or so below ground and discharge mostly water, mud and blocks to few metres from the vent. Geological records suggest that major-very large explosions are very infrequent, occurring a few times in the lifetime of a geothermal system.

All geothermal systems produce gas. The Rotorua system is the most famous for its distinctive rotten egg odour, from the hydrogen sulphide (H2S) gas. Geothermal systems also produce carbon dioxide (CO2) and methane (CH4) gas. As the hot fluids rise to the surface they carry the dissolved gases in them. They are released in solution via the surface features or as gas through the soil after separation of the fluid and gas phases.

Gas can be found in concentrations above lethal thresholds in contained or enclosed locations, however it dilutes quickly in open spaces. If care is taken in enclosed locations the gas hazard is minimal. Health studies do not demonstrate there are any known health issues from geothermal gas.

Each year around 800-1000 shallow earthquakes are located in the Bay of Plenty area. Some earthquakes are clustered around the faults, while others focus on the larger volcano-geothermal areas. However not all geothermal or volcanic areas have regular earthquakes. Geothermal production can create small-moderate local earthquakes

Mitigation and protection can be achieved by using setbacks and controlling the allowable development activities. Restricting access in areas of known risk If you wish to undertake any activity such as building works or earthworks near a surface feature you may require a resource consent from us and/or the relevant district council. 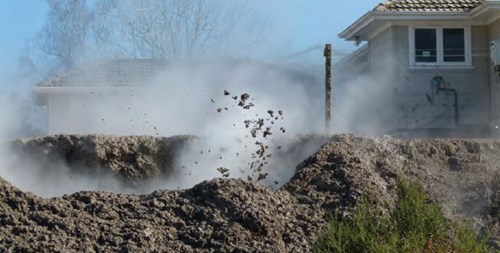 There are three types of geothermal wells that are used including production and injection wells, and down-hole heat exchangers. Any geothermal well can create health and safety risks. Building geothermal wells to best practice standards and keeping them in good condition keeps people safe.