The Rotorua Geothermal System underlies Rotorua city from the southwestern end of Lake Rotorua to the Whakarewarewa Valley. It is part of the Taupō Volcanic Zone, which extends from Whakaari-White Island in the Bay of Plenty, southwest to Mt Ruapehu. 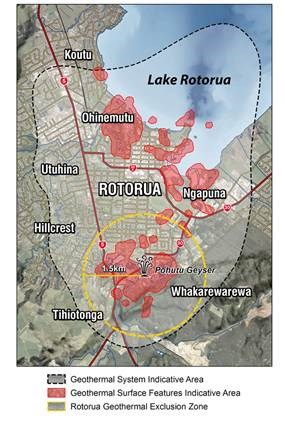 The system has been the focus of significant attention, initially developed as a spa town using the natural surface features. Later exploitation and growing awareness of the implications of exploitation lead to the need for a stringent management regime so utilisation could be balanced with preservation of the surface features and associated values.

Unique in the world, management regimes introduced in the 1980-90 period and carried over into the Regional Plan have resulted in substantial recovery of the Rotorua Geothermal System. Ongoing careful allocation of the resource is important. Summaries and discussion of the Rotorua system can be seen here:

The Rotorua Geothermal System like others in the region are a by-product of the large-scale volcanism in the Rotorua-Taupō area. The very large Rotorua Caldera forming eruption about 230,000 years ago, produced about 200 cubic kilometers of volcanic ignimbrite. Following this eruption, the caldera collapsed to form the modern Rotorua basin. Lava dome building eruptions followed for about 100,000 years leading to features such as Mt Ngongotahā, Mokoia Island, Owhatiura and Pukeroa hill.

About 1500 geothermal surface features are recognised in Rotorua that have important economic, ecological, landscape and cultural values.. They represent the full range of surface feature types and include some of New Zealand’s last remaining geysers. The subsurface processes and pathways result in geothermal fluids and gases reaching the surface to form the wide variety of features seen in Rotorua. There are also three habitats associated with surface geothermal features, the aquatic one (springs and steams), the terrestrial one (warm and heated ground) and the micro-climate atmosphere. 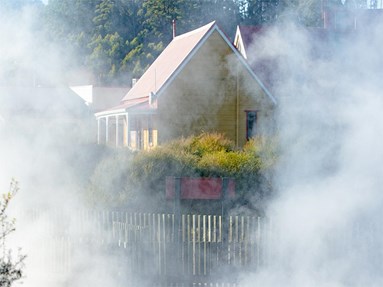 Shortly after arrival on the Bay of Plenty coast Te Arawa people started to explore inland. The explorer Ihenga discovered the Rotorua lakes area and soon after people settled on the southern shores of Lake Rotorua. Māori consider geothermal a taonga (treasure), being used for cooking, bathing, heating, ceremonial use and healing for generations. Rotorua’s geothermal surface features have been used in a low impact way by Māori for hundreds of years, for practical as well as spiritual purposes.

The geysers, flowing springs and other thermal features attracted visitors to the Rotorua area and extractive use of the system began in the 1870s when the area became a tourist destination, influencing settlement patterns. The New Zealand government leased land from Ngāti Whakaue in the 1880’s to establish the town of Rotorua as a European style spa resort for tourists visiting the ‘hot lakes’. The spring flows started to be manipulated and modified to provide for bathing and spa development. Demand grew post the 1930’s and 40’s with tourism, farming and forestry post the second world war seeing bore numbers rise with population growth, power shortages. Following energy shortages in the early 1950s, extraction of geothermal heat and fluid for private use became commonplace. By the 1970s more than 1,000 bores had been drilled with depths of 50 to 200 metres below the surface. As a result many geothermal features and activity in Whakarewarewa Valley, Kuirau Park and Arikikapakapa began to decline significantly. The first oil shock led to rapid, unregulated, demand growth in the late 1970’s.

It became very apparent development was destroying the geothermal surface features of Rotorua. In 1980 the Minister of Energy and the Rotorua District Council announced guidelines for better efficiency and use of geothermal energy, including no new bores with 1.5 km of Whakarewarewa. The Rotorua Monitoring Programme (RMP) was initiated in 1982 to develop a better understanding of the Rotorua system. Many issues were identified around gross inefficiencies and poor licensing. 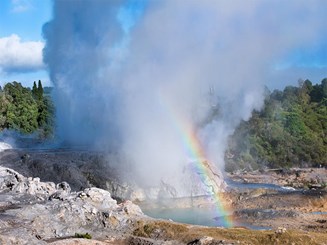 Action was needed to protect and preserve the Rotorua system. A Government enforced bore closure programme began around 1986; introducing a total ban on geothermal fluid extraction within a 1.5 km radius of Pohutu Geyser and no increased heat take. This change resulted in an estimated 60% reduction in withdrawal of geothermal fluids. The number of shallow bores reduced from about 370 to 140. Currently there are 130 consents for the take and use of geothermal water and energy in Rotorua. Around 90 percent of takes reinject fluid, mitigating depletion of the resource. There are also about forty down hole heat exchangers.

Ongoing careful allocation of the resource is important. There are several relevant regional planning documents that guide management of the geothermal resource, including the Bay of Plenty Regional Policy Statement and regional plans.

The Rotorua Regional Geothermal Plan largely carried over the management regime bought in by the Government. Its purpose is to promote the integrated and sustainable management of the Rotorua geothermal resource. Under the plan the use and discharge of geothermal fluid requires a regional resource consent, unless it is a traditional take for the communal benefit of tangata whenua. The Rotorua system has a wide range of values. The unique surface features have significant cultural, ecological and landscape values and are a major attraction for tourism in Rotorua. In 2016/17 tourism in Rotorua was a $799 million per annum industry, and indirectly provided about 18% of employment.

The continuation of the natural surface activity is vital for Rotorua tourism, a significant sector of the Rotorua economy. Geothermal fluid is directly used for bathing and wellness, including commercial properties and private use. Space and water heating accounts for a significant proportion of the use, including commercial properties, the Rotorua Hospital and municipal facilities. Over 400 homes are heated by geothermal energy in Rotorua. There is currently no geothermal electricity generation or industrial direct heat use.

Unique in the world, management regimes introduced in the 1980-90 period and carried over into the Regional Plan have resulted in substantial recovery of the Rotorua Geothermal System. The monitoring data (wells, ground water, surface features) show the system underwent aquifer recovery from 1986 to 1994 and has been in a new sustained phase of equilibria where the management regime (extraction and reinjection) and long-term climate are the primary drivers of change.