Bay of Plenty Regional Council carries out environmental monitoring to meet the responsibilities of the Resource Management Act.

Natural environment monitoring helps work out the impact of different activities on environment quality across the region. This is called the Natural Environmental Regional Monitoring Network. 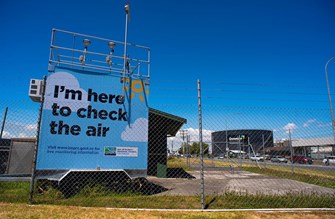 It also specifies requirements for monitoring those pollutants if the standards are breached.

Data on the following air contaminants is held by the Bay of Plenty Regional Council.

Carbon monoxide is a poisonous gas.  Prolonged exposures at moderate concentrations can cause headaches and dizziness.  Chronic exposure at lower levels has been linked to an increased incidence of heart disease.

The air quality guidelines for carbon monoxide were exceeded on a number of occasions in the past in Tauranga (Nichol et. al.,1996), which indicates that air quality is already being compromised.  This was recognised in the Operative Regional Air Plan released by Council, and a number of actions were proposed for dealing with this issue.  Carbon monoxide monitoring is therefore an important component of the Air NERMN programme, to determine the current extent of any problem, and any improvements that occur as the result of any regional (or national) initiatives.

In New Zealand the main source of PM10 emissions in most areas during the winter months is solid fuel burning for domestic heating, although industrial contributions may also be significant in a number of locations.  Domestic home heating is also responsible for the majority of the PM2.5 emissions in most locations as most of the PM10 emissions from this source are the smaller PM2.5 size fraction.  Motor vehicle emissions may also be a major source of PM10 and PM2.5 in Auckland, although further work is being carried out to assess this.

The characteristics, sources and potential health effects of larger or "coarse" particles and smaller or "fine" particles are very different.  Coarse particles come from sources such as windblown dust from exposed surfaces like building sites and unsealed roads, from mines and quarries, and some industrial activities.  Fine particles are generally emitted from activities such as industrial and residential combustion, and from vehicle exhaust.  Fine particles are also formed in the atmosphere from gases such as sulphur dioxide, nitrogen oxides and volatile organic compounds that are emitted from combustion processes and become particles because of chemical transformations in the air.

Coarse particles can deposit in the upper regions of the human respiratory system and may contribute to health problems such as bronchitis and aggravation of asthma.

Fine particles can deposit deeply in the lungs, and are therefore more likely to contribute to a range of health effects, which have been found in a number of recently published epidemiological studies.

This makes it important for Council to continue to develop a good understanding of the current levels of airborne particulate matter throughout the region, as part of the Air NERMN programme.  Measurements are being mainly directed at urban areas because the major contributors are likely to be motor vehicles and residential heating using solid fuel fires, especially wood burners.

The smell of hydrogen sulphide (H2S) is an obvious feature of New Zealand geothermal areas, most of which are found in the Bay of Plenty.  This gas is very toxic at high concentrations, but little is known about its health effects at the lower levels found in most parts of Rotorua and other geothermal areas.

Field monitoring data shows that geothermal activity in Rotorua has increased over the last few years, probably as a result of the reduced abstraction rates and more re-injection.  If this trend continues it will be important to determine whether hydrogen sulphide levels in the ambient air are also being affected.

Sulphur dioxide is produced mainly from the combustion of fossil fuels that contain sulphur, such as coal and oil (for example, coal being burnt in a home fireplace for heating and diesel-powered vehicles). Sulphur dioxide is also produced from some industrial processes, such as fertiliser manufacturing.

Sulphur dioxide can cause respiratory problems, such as bronchitis, and it can irritate the nose, throat and lungs. It may cause coughing, wheezing, phlegm and asthma attacks. The effects are worse during exercising.