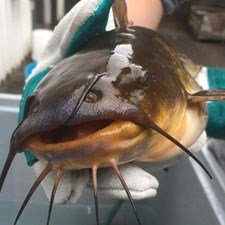 Brown Bullhead catfish originate from North America and were first brought to New Zealand in the late 1800s. Catfish have no known predators in New Zealand and can survive out of water for up to 48 hours, making them even more capable of invading new areas.

Catfish are both Exclusion and Progressive Containment pests. Please refer to the map below to identify which areas these categories relate to.

Exclusion pests are not known to be present in the Bay of Plenty region, or in parts of the region. The Bay of Plenty Regional Council is responsible for managing new incursions into the region. Action may be required from landowners or occupiers to support a control operation.

Rules require land occupiers to destroy all catfish in any pond or waterway (eradication will be led and funded by the Bay of Plenty Regional Council).

It is an offence under sections 52 and 53 of the Biosecurity Act 1993 to sell, offer for sale, display, release, move or breed catfish in the Bay of Plenty region. Serious penalties are associated with distributing catfish in waterways.

The Bay of Plenty works with Te Arawa Lakes Trust who have established a community based, volunteer netting program to remove catfish from Lake Rotoiti and Lake Rotorua. If you are interested in joining this program, please contact Bay of Plenty Regional Council who will put you in touch with the Te Arawa Catfish Killas.

The option of using a biological control to significantly reduce catfish numbers is also being investigated. For more information on the project visit the Catfish Population Control project page.

Removal of fish from waterways is difficult and requires expert advice. For advice, or to confirm the identity of a fish, call Bay of Plenty Regional Council on 0800 884 880 or email info@boprc.govt.nz