Five are now operating on the NZ Bus run Bayhopper fleet, the first in New Zealand outside of a main metropolitan centre. They’re part of Bay of Plenty Regional Council’s commitment to low carbon public transport. 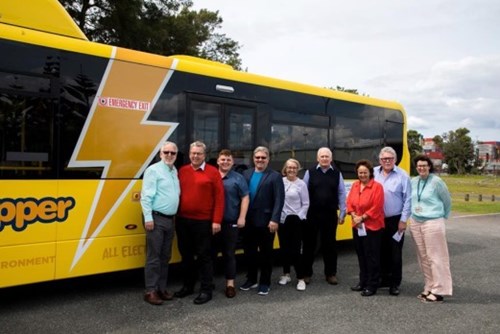 Above: Bay of Plenty Regional Councillors in front of one of five new electric buses with chief executive Fiona McTavish (far right).

“The buses are zero emission and because they are electric have reduced noise levels and provide a smoother ride for passengers and the driver,” Ms McTavish says.

“It’s great to play a part in public transport history in Tauranga and our team is excited to be involved with this cutting edge technology,” Mr Hinkley says.

“ADL have built more than 350 electric buses for use worldwide, with a similar model to the Tauranga buses being found on the streets of London.”

The five electric buses are based out of the Greerton depot where each one has a charging station. They predominantly service the HL, CL and CT Connector routes.

The up-front cost of an electric bus can be as much as twice the cost of a diesel equivalent but the operating costs are significantly lower.