Work is underway on a flood-damaged section of Lowe Road near Waimana, as part of a joint Bay of Plenty Regional Council and Whakatāne District Council project to provide safer road access for local residents.

Bay of Plenty Regional Council Flood Recovery Project Manager Paula Chapman said the section had been badly eroded in the April 2017 flood event and scoured away to such an extent that the road surface itself was impacted.

“The Tauranga River runs alongside Lowe Road in several places and during the April 2017 flood event, it eroded the banks, putting the road at risk in several places. This is one of our high priority repair sites and part of the $11.47m budget we have set aside for the 2018/19 year,” Ms Chapman said. 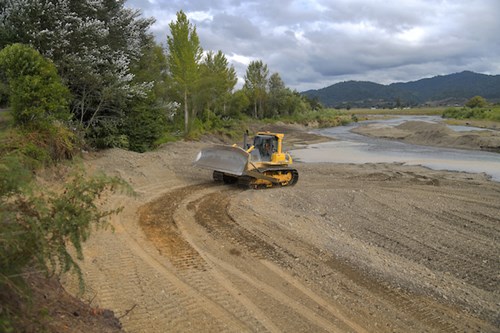 Whakatāne District Council Transportation Manager Martin Taylor said the rural road was an important link between Waimana and communities up the Matahī Valley and was used daily by the school bus and local traffic.

“Since the April 2017 flood, sections of the road have had to be narrowed with cones and orange mesh fences where the road shoulder has been completely eroded away. The next flood could easily be the one that then takes the road itself away. To ensure that doesn’t happen we are working together with the Regional Council to reinstate the road shoulder and strengthen the river bank.

“We expect works to continue for the coming six weeks and hope to fully reopen the road by the end of April,” Mr Taylor said.

Contractors will realign the river channel to provide a working area for repairs. There will then be significant work to bench the river bank up to road level, before the road is repaired and resealed.

“Benching and stabilising the riverbank back up to road level will require a lot of rock material and we have been stockpiling that on-site for some weeks now, so our thanks go to local users who are being inconvenienced by additional truck movements. Please continue to take care around the work-site for the coming months,” Ms Chapman said.