A celebration to recognise the end of dredging for the Kopeopeo Canal Remediation Project was held yesterday as part of the final Community Liaison Group meeting.

It was a significant milestone for the project and an opportunity for the Project Team to thank the group for their contribution over the past four years. They also recognised the support they’d received from wider the community, iwi and many other agencies while on the journey. 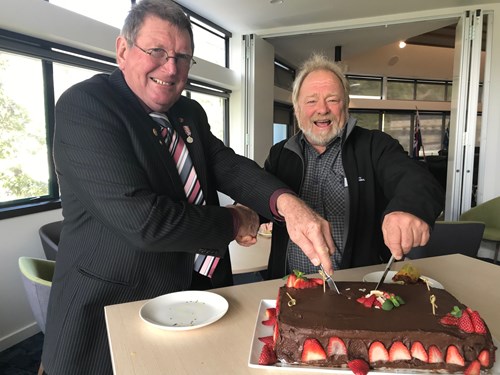 Above: John Pullar (current CLG chair) and Bill Clark (former CLG Chair) cut a cake to say thank you to the Liaison Group for many years of hard work.

Bay of Plenty Regional Council Chair Doug Leeder explained that the project had successfully completed the removal and storage of around 35,000m3 of sediment into two containment sites. It is being treated alongside the canal in line with iwi aspirations to heal the land within the rohe. He said that it had been a substantial undertaking for the Bay of Plenty Regional Council but was pleased that the contamination is now safely contained and the canal was safe for future generations.

“This is one of the largest decontamination projects anywhere in New Zealand and to have successfully completed this stage is a significant recognition of the work of many parties – the Council and our project team, the community groups, the contractors and the co-funders, the Ministry for the Environment. It is an excellent outcome for all concerned,” Mr Leeder said.

The Chair of the Community Liaison Group (CLG) John Pullar had high praise for the work of the group and the commitment and knowledge of the groups represented around the table.

“This project has been a long journey for all of us. The CLG has given up so much time and energy to making this project a success and I cannot thank everyone enough for that work. We have met dozens of times over the years and the group has shared their knowledge and skills and their relationships into the community. I have spoken at length to the project team, they have said unreservedly that this project couldn’t have got to this point without the support of this group,” Mr Pullar said.

Project Manager, Brendon Love also acknowledged those who had passed away during the project, but who also contributed so much to handing a healthy canal back to the community.

“In particular, I would like to acknowledge Joe Harawira who was a key instigator for this work and who spent so many years fighting for acknowledgement of the effects of timber treatment contaminants on sawmill workers. Joe worked at the former sawmill and did so much for the wider community through SWAP.

“I would also like to acknowledge Arch Delahunty who was part of the project team and who knew the area like the back of his hand. They both would have been incredibly proud of us for getting to this point,” Mr Love said.

Mr Love also acknowledged the contractor, EnviroWaste and their subcontractors. “The contractors, in particular Des McCleary from EnviroWaste who has led the team over here for many years, have worked hard to get to this point and we’d like to acknowledge their contribution as well,” Mr Love said.

While the dredging phase has been completed and validation sampling confirmed the canal has been cleaned out, topsoil capping of the containment cells still needs to be completed and work started on the bioremediation phase. Bioremediation enhances the natural degradation process using a combination of fungi, bacteria and plants are proposed to help speed up the natural degradation of the dioxins.

Once this has been done at the Keepa Road site, safe vehicle access will be created through the site to the canal and Whakatāne River towards the end of the calendar year. Public will not be permitted on to containment cells themselves as bioremediation will continue inside the storage bags for a number of years. During this time the project team will continue to monitor dioxin levels in the containment cells and canal aquatic life.

“This means that the remediated canal is now safe for recreational users – kayaking, boating, bird watching, any number of other activities. But it is worth remembering that eeling and fishing are still restricted in the canal until long term monitoring results confirm that eel tissue is safe for consumption.

“Because eel can now migrate back into the remediated section of the canal and it takes some time for any potential effects to be observed, we will continue to monitor dioxin levels in eel and other aquatic life over at least the next five years. We must be absolutely certain that dioxins are not being transferred into the aquatic food web and we need several years of data to confirm this,” Mr Love said.