Flood repairs ahead of schedule

Glancing to the right, as you drive into Ōpōtiki over the Otara Bridge, an area of bare rock stands out from the green swathe of river stopbank.

The recently reshaped section of stopbank, which directly defends the town, is one of 22 sites on the Waioeka – Otara Rivers Scheme that have been repaired following damage caused by April 2017’s ex-Tropical cyclones Debbie and Cook.

In all, 59 sites on the Waioeka-Otara River Scheme were impacted by the weather events and those works form part of a 520-site, $45million, repair programme across the rivers and drainage schemes managed by the Bay of Plenty Regional Council.

Tony Dunlop is the Regional Council’s Flood Restoration Project Engineer. Having spent almost 40-years of his 45-year career working within the local catchment, it would be fair to say Dunlop knows the rivers and their defence systems better than anyone.

He says rock in the section of Otara River stopbank, behind the premises of East Bay Concrete, was dislodged by the April 2017 flooding, resulting in the need to replace material and reshape the bank.

“While the new rockwork is clearly visible now, in time, the turf we saved off the bank and placed among the rocks will grow into a mat, which will help ‘knit’ the rocks together, adding to the bank protection.”

Work started on the extensive repair programme shortly after the storms, once the extent of damage was identified and sites prioritised. Despite consistently wet conditions which limited progress until the end of winter 2017, the project is ahead of schedule.

“That’s also taking into account a further flood in the Otara in February this year which worsened some of the existing damage,” Mr Dunlop adds.

The February flood saw a record peak of 5.2metres, on the Otara River at Browns Bridge, about 4.5 metres above normal summer levels.

“That flood caused further damage to a site on the Brown property where the river was threatening a major rural stopbank asset, and power supply. The extent of the erosion damage left no room  for a like for like repair  and instead of a significantly more costly stopbank realignment, we were able to design an effective repair involving battering the bank to create a suitable berm and rock-lining the river bank to control future erosion,” Mr Dunlop explains.

The availability of suitable material, which has been of concern for the repair project across the region, hasn’t had a negative impact on the Ōpōtiki work because a steady and secure supply of rock has been sourced from the Rakauroa Quarry in Matawai.

“The repairs have stopped for now because the winter ground conditions make site access a problem and the river levels can be affected by rainfall. We also need to work around fish spawning seasons. Now’s the time for planning and stockpiling rock so we’re ready to get right back into it in the next construction season. We’ve got 37 sites left to repair in the Waioeka-Otara Rivers Scheme and the expectation is that all that work will be complete by the middle of 2020,” Mr Dunlop concludes. 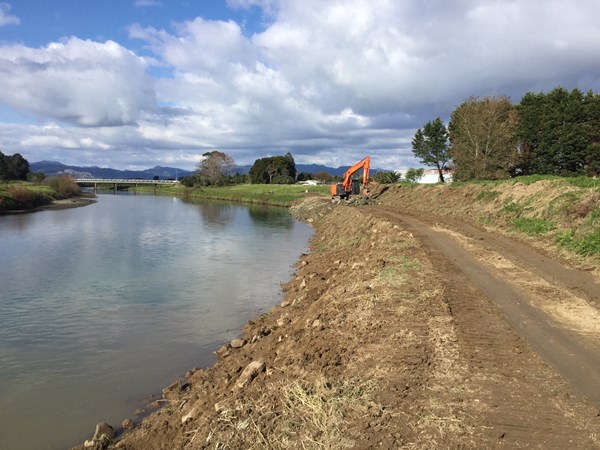 Repairs are now complete on the section of Otara River stopbank behind Eastern Bay Concrete.

Flooding in February 2018 worsened the bank erosion on the Brown property at Otara. 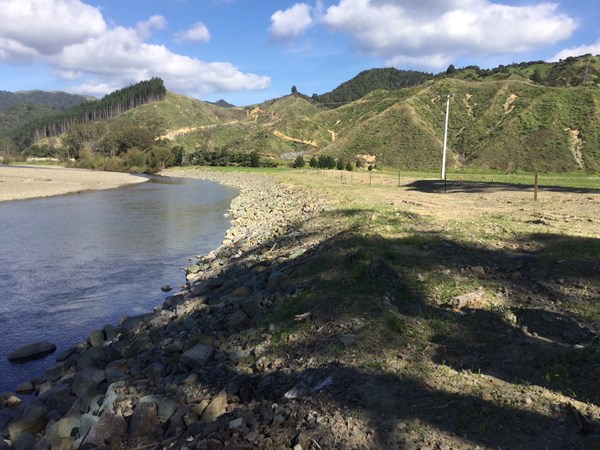 The completed repair involved battering the bank to create a suitable berm and rock-lining the river bank to control future erosion.