“Tangata whenua and local residents have been calling for river flows to be restored to the estuary since 1979. The health of the estuary has been declining since the river mouth was diverted away from it in 1956. We listened to the concerns of the community and started consultation on a preferred option in 2013. We’re now ready to start physical works,” said Bay of Plenty Regional Council Chairman Doug Leeder.

Construction work is due to start by September this year and will take approximately two years to complete. The work will cost $13.5m and involves creation of a new channel to carry freshwater from the river into a new inlet structure at Ford’s Cut. Existing stop banks will be shifted and upgraded, the Ford Road boat ramp will be improved, and 20 hectares of new wetlands will be created on low-lying land that has been retired from grazing.

Regional Council’s Kaituna Catchments Manager Pim de Monchy said that the overall goal of the project is to restore up to twenty percent of the Kaituna River’s freshwater flows into the estuary, so that the mauri (life-force) of the estuary is restored and it becomes healthier for wildlife to live in and people to enjoy.

“We’ll be doing that in a way that maximises the environmental and cultural benefits, while maintaining existing levels of flood protection and boating access,” Mr de Monchy said.

“All the options were considered and assessed by a range of engineering, hydrology, ecology, and planning experts, alongside feedback from iwi and the community.

We’ve already done a huge amount of work to get all the necessary resource consents and land acquisitions in place, and source a contractor. It’s really exciting to now start turning all our plans and preparation into action on the ground,” Mr de Monchy said.

J Swap Contractors Ltd Manager Shanan Mowatt said that the company Directors are thrilled to be awarded the contract.

“We’re looking forward to helping restore the Kaituna River and Maketū Estuary over the next two years, together with Regional Council and the local community,” he said.

Meetings with tangata whenua, stakeholders and the wider community will be scheduled by Regional Council staff in the coming month, to introduce the contractors and outline the process and timeframes for the work before it starts. People can subscribe to receive email updates or see further information about the project at www.boprc.govt.nz/kaitunamaketurediversion. 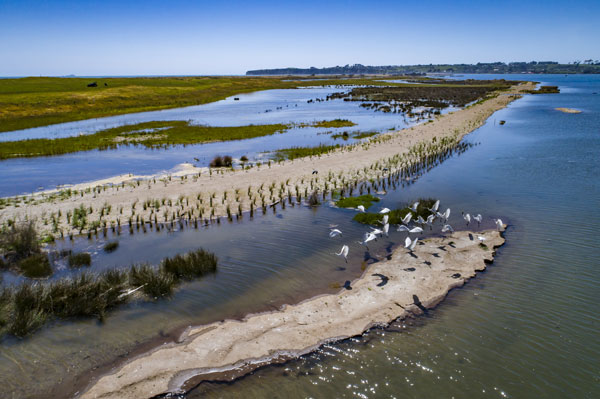 The upper Maketū Estuary which will become healthier by increasing freshwater flow from the Kaituna River into the Ford's Cut channel (centre left). Low-lying pasture land (Te Paika) to the right of Ford's Cut will be restored as wetland.