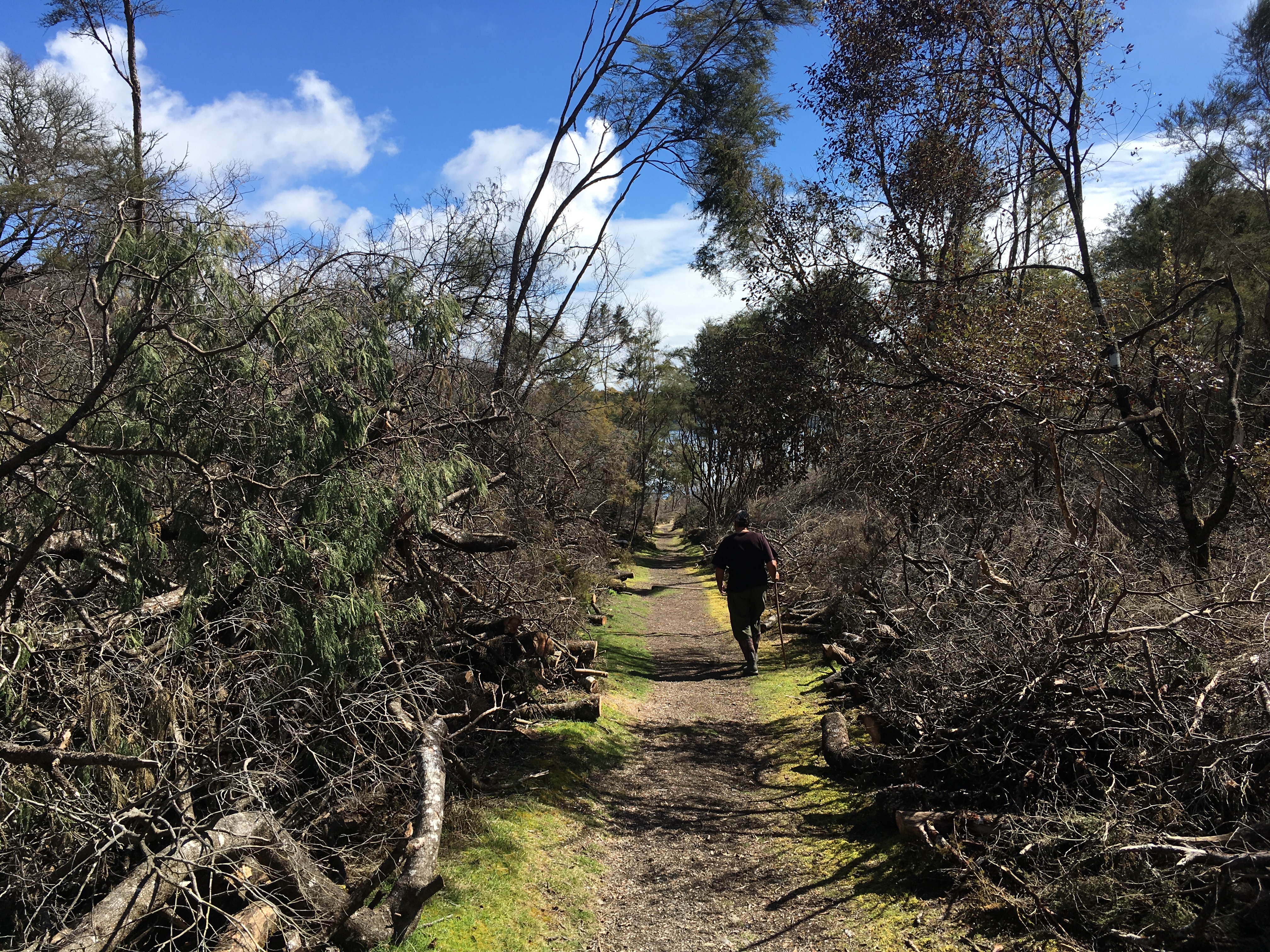 Ken Raureti walking through the silver wattle trees that have been injected and felled.

Bay of Plenty Regional Council, Department of Conservation and Ahu Whenua Trusts Ruawāhia 2B, Rotomahana Parekarangi 6Q2B and Te Ariki have joined forces again this year to control silver wattle in Tarawera. The Tarawera Wattle Control Project is in its third year of operation with a focus on the heavily infested area between lakes Tarawera and Rotomahana.

Regional Council Land Management Officer Scott Kusabs says controlling the wattles achieves benefits for both the natural biodiversity of the catchment area and water quality of the lakes.

“Silver wattle has managed to alter the natural vegetation of Te Ariki, the area between Hot Water Beach and Mount Tarawera and there was real potential to spread further if we had not intervened when the project began.”

“As a legume, it has the ability to fix atmospheric nitrogen into the soil which is then leached through the groundwater and into Lakes Tarawera and Rotomahana.”

Te Ariki Trust Chair Ken Raureti says the same crew that has undertaken the groundwork over the last three winters have managed to control wattles over 250 hectares of land.

“They have covered some challenging terrain through the harsh winter months in order to carry out stem injection of herbicide to kill the wattles and fell them in a safe manner that does not disturb the surrounding natural vegetation.”

Mr Raureti says the crew is predominantly made up of people who whakapapa to Ngāti Rangitihi, Tuhourangi, and the whenua (land).

“This project is a blue-print example of Iwi connection, whakapapa and kaitiakitanga in action.”

The plan in the future is to control seedlings and regrowth in areas already controlled as well as taking out the remaining thick stands of mature wattle trees and pines.  The Tarawera Wattle Control Project together with the Mt Tarawera Wilding Conifer Project is restoring the Mount Tarawera slopes and surrounding forest areas to a more natural state allowing one of New Zealand’s youngest landscapes to regenerate at its own pace.

“Revitalising the Tarawera catchment area is possible because of the various groups and experts who have supported the project to date and we would like to acknowledge them for their contribution of time and expertise,” says Mr Raureti.