A fault is a crack in the earth’s surface that was formed by movement of the earth’s crust, and is likely to become the source of another earthquake sometime in the future.

Geologists commonly consider faults to be active if there has been movement observed or evidence of seismic activity during the last 125,000 years.

During earthquakes, the ground on one side of a fault may suddenly move horizontally or vertically by up to several metres. When this occurs, any buildings or other structures that straddle the fault may be severely damaged. Such ruptures are often not a narrow line, but may be a zone up to tens of metres wide. 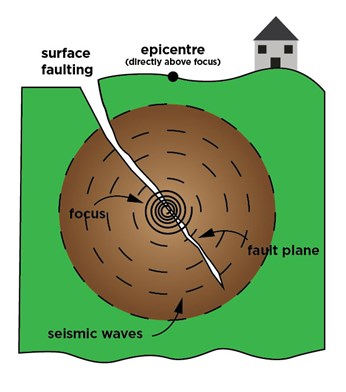 The land masses on either side of an active fault are slowly moving past each other. Sometimes the two opposing edges get stuck, leading to the build-up of pressure. When the force of movement finally overcomes the friction of the area that is stuck, sections break or become displaced, releasing the pent-up pressure in the form of an earthquake.

Impacts on the built environment:

What does this mean for the Bay of Plenty region?

The Ministry for the Environment has published a guidance document Planning for Development of Land on or Close to Active Faults (2003). This document sets out guidelines for the mapping of active faults, and how to plan for fault rupture hazards.

When planning for development on or near active faults, the main considerations include the location where an active fault will rupture the ground, and the level of activity of the fault (the recurrence interval). These will dictate what type of buildings or infrastructure are suitable to be built on, or near, a particular fault.

This approach does not guarantee that a building will not suffer damage from fault rupture. However, it does establish that the risk of damage will be sufficiently low as to be considered acceptable. For example, there may be areas where it would be suitable to build a farm shed, but not a dwelling.

Since 2017, Regional Council has commissioned localised and regional Active Fault Studies to determine and map the absence or presence of active faults at numerous sites identified for proposed urban development in the Rotorua, Whakatāne-Ōpōtiki and Western Bay of Plenty areas.

The assessments Regional Council have undertaken have been completed in accordance with MfE guidelines, and will help our territorial authorities plan and assess the suitability of new developments under the Resource Management Act 1991 and Building Act 2004.

Where can I view these maps?

Bay of Plenty Regional Council mapping of the areas above will be available in due course. Please click on BayHazards below to view regional onshore and offshore fault lines.

What do I do in an earthquake?

For information on what to do in the event of an earthquake, visit the Bay of Plenty Civil Defence website.