The Kawerau Geothermal System is located to the north-east of Kawerau within the Bay of Plenty Region, and partially underlies the township of Kawerau.

It has been substantially developed for industrial purposes pursuant to resource consents granted by BOPRC under the Resource Management Act 1991 (RMA). This includes geothermal energy being used for electricity generation, industrial processes (direct heat) and cultural purposes.

The Kawerau Geothermal System is based on the inferred resistivity boundary extending over an area of approximately 35km2. The system has been developed since the 1950s and understanding of the system has evolved over nearly 70 years. The Kawerau Geothermal System is the only geothermal system in the Bay of Plenty Region that has been the subject of large takes and discharges of geothermal fluid for electricity generation, and industrial direct heat purposes.

Surface geothermal features at Kawerau are concentrated in a 2 km2 area. Prior to development they included hot springs, seepages, sinters, hydrothermal eruption vents, altered and steaming ground, and small fumaroles. The features were at Onepu, with springs and seepages along the banks of the Tarawera River and around Lake Rotoitipaku, and steaming ground near the township.

Interpretation of early chemical and physical data and feature descriptions indicates the thermal activity suffered decline during the early 1900s, prior to exploitation of the geothermal resource. Latter changes in the surface features is a mix of the exploitation and downcutting by the Tarawera River. Apart from seepages into the Tarawera River most of the features at Kawerau are no longer discharging. Aerial photographs and thermal infrared imagery indicated that areas of bare ground and stressed vegetation decreased in size from 1945 to present. 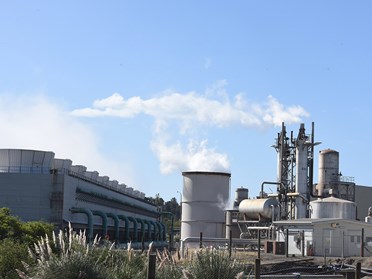 Today the timber, pulp and paper factories utilise steam for process heat, electricity generation and timber drying. Bay of Plenty Energy developed two binary plants to generate electricity. Until 2005 the geothermal resource at Kawerau was owned by the Crown. In July 2005 the Crown negotiated a Treaty of Waitangi settlement with Ngāti Tūwharetoa Ki Kawerau, resulting in a transaction between the Crown, Mighty River Power and Ngāti Tūwharetoa Settlement Trust (NTST). The Crown transferred the geothermal assets to MRP. MRP then sold most of the geothermal assets, to NTST. These assets are managed by Ngāti Tūwharetoa Geothermal Assets (NTGA) along with TOPP1 power station, which generated 24 megawatt electrical power in 2013.

The 100 megawatt Kawerau Geothermal Power Station owned by Mercury (KGL) opened in 2008. The Te Ahi O Māui (TAOM) power station was commissioned in September 2018. New wells have been drilled over the years to replace declining injection wells and to improve production. Local surface subsidence has been measured at Kawerau since the 1970s. A broad area of subsidence extends over about 6 km2, with a smaller localised area within. Subsidence rates range from 1-2cm per year. 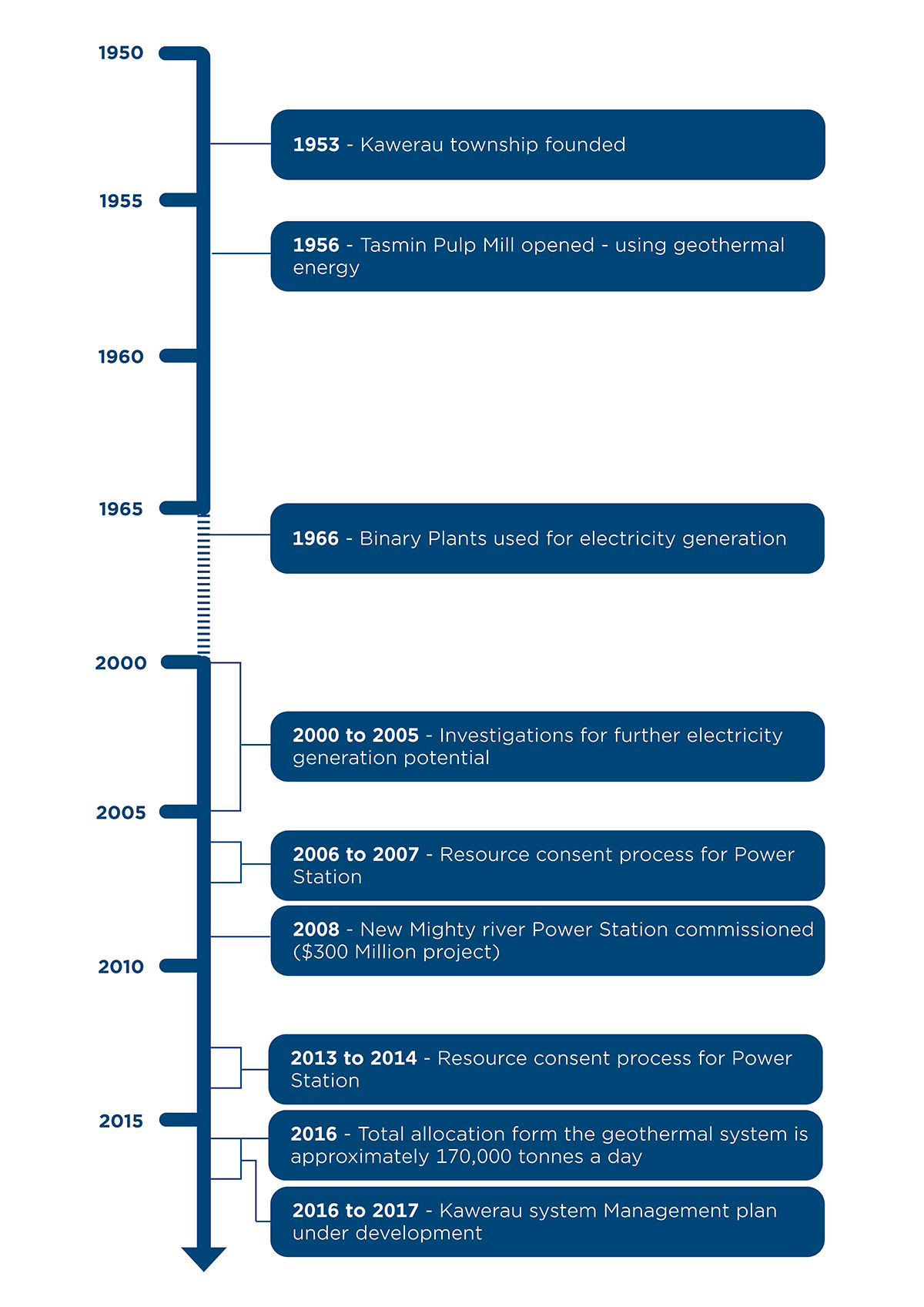 The Kawerau Single System Management Plan (SMP) has been created to allow for the integrated management of the Kawerau geothermal system in accordance with the Bay of Plenty Regional Policy Statement. The focus of this SMP is therefore to guide how the Kawerau Geothermal System is managed to meet the needs of current and future generations in a sustainable manner. This includes agreed operational protocols between consent holders and between consent holders and BOPRC to achieve sustainable and integrated development of the Kawerau Geothermal System.

Bay of Plenty Regional Council will continue to manage the Kawerau Geothermal System under the Resource Management Act (RMA) 1991 through resource consents for the taking of geothermal water and heat, and geothermal discharges, Council is assisted in this role by an impartial Peer Review Panel, consisting of three independent technical experts. Major consent holders report to the Peer Review Panel and Council about the state of the geothermal system on an annual basis. Council has summarised these reports to develop annual community reports on the state of the system.