In September 2020 the Government released a new National Policy Statement for Freshwater Management. This directs how regional councils must manage freshwater and activities that affect freshwater. This was amended again in December 2022.  All councils, including Bay of Plenty Regional Council, must now give effect to this.

We are now required to update our regional rules to give effect to these stricter national targets.

Why changes are required

Sadly, some of our waterways have poor or declining water quality as they are being impacted by what we do or the changes we are making, urban development, agriculture, horticulture, forestry, water use, diversion, damming and so on. This poor or declining water quality is affecting the ecology, swimmability and ability to gather kai (food) and kaimoana (seafood) from these waterways or receiving waterbodies.

Existing rules and regulations have not been enough to stop the decline in water quality in some of our catchments.

We also need to make sure that the amount of water taken from rivers and groundwater leaves enough in the water body itself for ecosystem health and other important values.

Also, the land and water parts of our Regional Natural Resources Plan are pretty old, and in some cases don’t meet current good practice or align with new national regulations and requirements. So, we need to update them.

What changes we can expect

The updated National Policy Statement for Freshwater Management, the National Environmental Standards for Freshwater regulations, and Stock Exclusion regulations are based on the fundamental concept of Te Mana o te Wai. This concept makes providing for the health and wellbeing of waterways the highest priority, secondly providing for human health needs and thirdly enabling other social, cultural and economic wellbeing related activities.  It also includes principles for freshwater management in New Zealand:

This means that the land and freshwater objectives, policies and rules in the Regional Policy Statement and Regional Natural Resources Plan will change, new water quality targets and limits will be added, and water take limits and minimum flows will change. Rules and methods will be established to ensure these limits are met.

All land and water parts of the Regional Natural Resources Plan are being reviewed including Discharges to Water and Land, Activities in Beds of Waterbodies, Wetlands, Water Quantity and Allocation, and Land Management chapters. They will also be aligned with the new structure and format set by the National Planning Standards.

When changes are happening

Our regional freshwater management policies and rules need to be updated by 2024 to meet these new requirements.

Staff across our Science, Policy and Planning teams are pulling together monitoring data, analyses, reports and modelling about the health of our waterways to get that big picture view of freshwater management issues. We’re using this information to draft policy and rule options to help stop further degradation of our waterways and improve them where needed.

Staff will need to complete assessments of options, draft up the plan changes and Councillors will then make their formal decisions. The changes to our policies and rules must be formally notified in 2024. 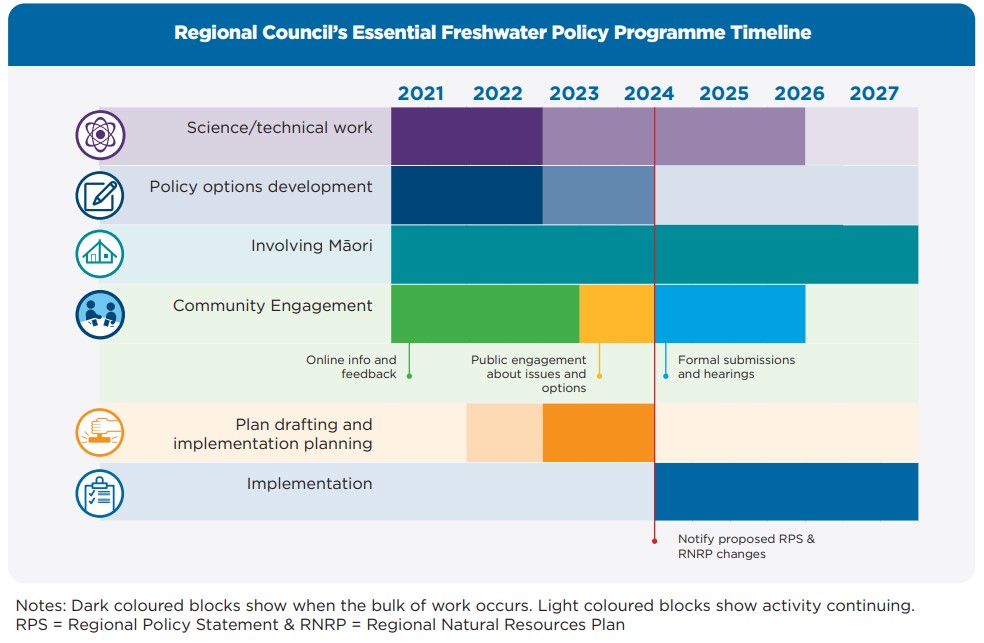 Who the changes will affect?

These changes are likely to impact many activities in the region. This includes any activity that takes and uses water from rivers, lakes, groundwater and wetlands; discharges into water and onto land; some land uses and practices; and structures and works within rivers, lakes and wetlands.

We acknowledge there is already a lot of change afoot due to new national regulations, and this is yet more. Farming and growing, municipal water supplies and industry have significant roles in creating a healthy environment, strong economy and vibrant communities in our region. We encourage your involvement so that we can work through and identify pragmatic solutions where these are needed.

Engaging with Māori on Essential Freshwater

Water plays a central role in Te Ao Māori (Māori world view) as the essence of life. Regional councils have a duty to involve Māori in freshwater management, to the extent they wish to be involved. This is a long-term journey of developing relationships, capacity and capability.

In 2020, Council approved Te Hononga, which sets out  a path to involving tangata whenua in this journey. We’ve met with many iwi and hapū about this in 2021 and some tangata whenua led projects are taking shape. Invitations have been sent to tangata whenua organisations about how to get involved in how our freshwater should be managed in the future and this remains as an open invitation. Sub-regional hui a rohe are being planned for April 2023.

In late 2021 we asked the community what freshwater areas are important to them and whether they were happy with its current state.  We also ran online public engagement in 2022 about long term vision and outcomes for freshwater. You can learn more about the feedback we received on Participate BOPRC.

From January -March 2023 we are raising public awareness about this work and how you can have your say through the media and we’ll be at:

From April – September 2023 we will hold engagement events across the region, starting with sub-regional hui a rohe (for tangata whenua) and an event in each of the 13 “Freshwater Management Units” (FMUs) through April and May. We’ll share the freshwater issues for the FMU and region, and the draft options we are thinking about to manage them.  This is a good time for you to give your feedback, because they are draft and have not been considered or adopted by your elected Councillors yet.

In 2025, anybody will be able to make formal submissions on the proposed plan changes and can be heard in front of an independent freshwater hearings panel.

In 2015, we set up three community groups in the Rangitāiki, Kaituna/Maketū and Pongakawa/Waitahanui catchments to provide input and advice as we worked on implementing the earlier versions of the National Policy Statement for Freshwater Management (2014 and 2017). They helped us to identify local community values and desired outcomes for freshwater. They were starting to look at issues and solutions in their catchments. While the work programme has changed, the input they provided is still useful. We aim to meet with them again in April 2023. There are also several other community groups in the region with an interest in freshwater who we will be in touch with.

This Forum has representatives of primary sector and environmental organisations. It provides early feedback and advice as we develop policy options for freshwater management. They will also assist us to engage with their membership when the time comes.

This group includes staff from each of the district and city councils in Bay of Plenty region as well as regional council. We share information and promote collaboration on freshwater management issues, particularly relating to district/city functions like water supply, wastewater and stormwater networks.

A summary of the issues and options for each of 13 draft Freshwater Management Units will be made available from April onwards.

More detailed reports will also be made available on our website or on request starting from April onwards.

You can also learn about the health of freshwater in your area through our online Water Quality Reporting Tool or by viewing a summary of the data on our State of the Environment page. 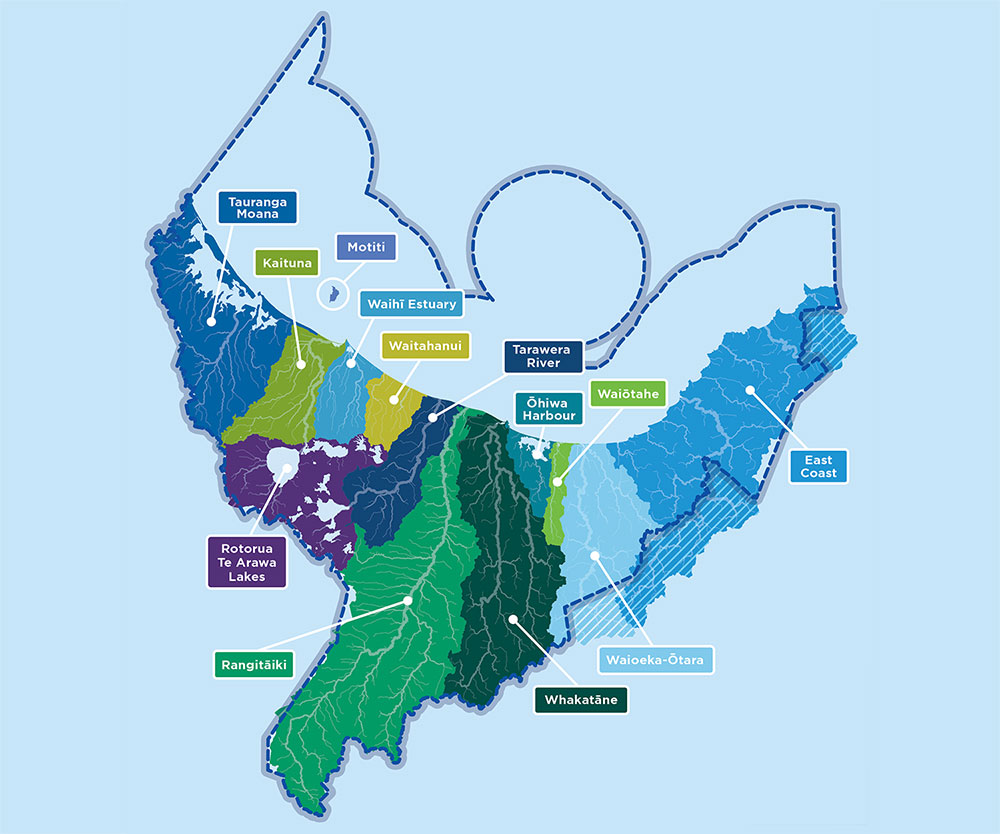 Want to keep up to date and involved?

Sign up to receive our Freshwater Flash e-newsletter. We’ll let you know about community engagement events April – September 2023 through that and on this page.

Keep an eye for our “Changing regional policies and rules to manage freshwater better” project on Participate Bay of Plenty and have your say.

To find out more:

Ministry for the Environment factsheets: